It was a day of great fanfare and celebration for all Trekkies. The latest film in the franchise, Star Trek Beyond, was released today, and the movie has been receiving rave reviews from both fans and critics alike.

When did star trek come out? This is a question that many people have been asking. The answer is, it came out in 1966.

How much has changed in five years!!

No, you aren’t reading my blog from yesterday, when I contrasted the lackluster Star Trek 50th anniversary celebration to the planned “Star Trek Day” live cast and activities for the 55th anniversary. In that blog, I posed the question of whether NO Star Trek was really “better” than BAD Star Trek. And, to be honest, I assumed the answer was self-evident…to the point that I was concerned that people on Facebook would mock me for writing 2,210 words on a topic as simple as “Is the sky green?”

Wow, was I taken aback!

Yesterday’s blog had over a thousand visits, and every few seconds, another “DING!” from Facebook, indicating that someone had left a remark in one of the dozen or so groups where I had placed a link. While many people agreed with me that even low-quality Star Trek might be better (and CBS Trek has been becoming better), others were adamantly opposed. They were enraged and deceived, arguing that the quality sacrifice was not worth it. Star Trek has to stay faithful to GENE RODDENBERRY’s original concept. And if it didn’t, if Star Trek just became “poor TV” (as they saw the new programs to be), it would be preferable to have no Star Trek as all…if forced to choose.

I couldn’t believe how many fans were still dissatisfied with the latest Star Trek films. To be honest, it depressed me as the day progressed knowing how many fans would prefer no new Star Trek at all to at least something…no matter how bad it was. I was nearly too depressed to watch the Star Trek Day broadcast when it began.

In fact, I didn’t want to watch it at first since I had to pick up my kid from Robotics and drive him home. The first part of the online event had already ended by the time we returned, but I saw people excitedly commenting on Facebook about the characters joining the crew of the USS Enterprise under the command of ANSON MOUNT’S Captain Christopher Pike in Star Trek: Strange New Worlds. Perhaps you’ve seen this…

Now, the Andorian/Aenar make-up made me squirm a little—assuming that’s who he is. Despite the fact that it deviated from known canon, it seemed to be very enjoyable (WAY better than first-season Star Trek: Discovery Klingons). And I’m still undecided on the uniforms. On the other side, I’m interested in seeing a younger Nurse Chapel and Cadet Uhura. It’s a risky move, but it’s not completely out of the range of possibilities. Kirk is likely already serving aboard the Farragut (in his early 20s) at this point, so if Uhura is a few years younger, it fits. Dr. M’Benga, on the other hand, might have been aboard the Enterprise at the time. Isn’t there a member of the crew called La’an Noonien Singh? KHANNNNNNN!!!!!!

But hold on! What was this new emotion I was experiencing? Oh, yes…fantasy!

When I finally saw the teaser for the new Nickelodeon children’s series Star Trek: Prodigy, which premieres on October 28, my enthusiasm grew. I’m not embarrassed to admit that my excitement for this program was first limited. I was going to give it a go since I’d really liked the Clone Wars, Rebels, and The Bad Batch animated Star Wars “children’s” series. Prodigy’s animation quality seemed to be on level with, if not better than, that of its Star Wars equivalents. And, let’s face it, if Prodigy didn’t look great, today’s youngsters wouldn’t give it a second thought since there’s so much more vying for their attention. We need to watch this program if we want to have a “next generation” of Trekkers.

So, heading into Star Trek Day, I guess you might characterize my attitude about Prodigy as cautiously hopeful. Then I came upon the fresh new trailer…

Wow! That seemed to be fantastic! It’s not even close to being “classic” Star Trek. There won’t be much (at least I don’t believe there will be) of the United Federation of Planets and Klingons and Romulans, etc., apart from the spacecraft Protostar and the Captain Janeway hologram. But let’s wait and see what happens. I’m interested, and I’m lot more hopeful today than I was before.

I checked in to the live event after seeing those two previews and started watching when the Star Trek: Lower Decks cast was on stage, and I was blown away by how much of a “family” they appeared to be. They clearly care about their characters, their show, their showrunner(s), and collaboration. And MIKE McMAHAN was as thrilled as he could possibly be! Let me tell you, that guy is a fan with a capital F-A-N, and I’m beginning to think of Lower Decks as a fan film/series in many respects. I don’t mean in the low-budget, amateurish sense, but rather in the sense of a genuine Star Trek fan getting to play in the sandbox and do anything he wants with the franchise. This guy is enjoying the life of his dreams.

Even though Lower Decks is almost halfway through its current ten-episode season, there was still time to display this incredible promo for the second half…

And in case you blinked and missed a few things, here are my three personal favorites from what was just broadcast…

The level of excitement is skyrocketing!

GEORGE TAKEI resumed the broadcast by reading a wonderful homage to TOS’ legacy… followed by a panel moderated by WIL WHEATON (who did an outstanding job!) Featuring George, TNG stars GATES McFADDEN and LEVAR BURTON (whose daughter MICA BURTON co-hosted), and ROD RODDENBERRY talking about Gene.

It was at this moment that I had a huge realization—one that most of you would dismiss as “Well, duh!”—that thousands, if not millions, of Star Trek fans across the globe were watching the same panel with me RIGHT NOW, in their homes, at their offices, or wherever. However, we were all experiencing an incredible time in Star Trek history by attending a global Star Trek conference together.

Sure, George’s voice was solemn (he’s 84! ), and I’d already heard his tale about meeting Gene for the first time (“Takai” means “expensive,” but “Takei” does not mean “cheap”) at least a half-dozen times. But it was the MOMENT, man, knowing that people were hearing the same tale I was—whether it was new to them or just another long George Takei anecdote—and all laughing together at the punchline, just as we do in the convention main hall.

Then I discovered something much more significant…

When it comes to Star Trek, I’ve lost sight of the forest (Deforest?) for the trees during the last several years. I’ve been so engrossed in Star Trek—fan films, interviews, editorials, blogs and podcasts, debates, collectibles, toxic fandom feuds, and all the rest—that I’ve forgotten to STOP and appreciate what Star Trek is, and how we fans share such a special relationship—I dare say, a symbiotic bond!—with the creators of these shows. Despite our regular kvetching on social media, they understand that Star Trek can only be a successful legacy if fans and creators work together. Neither of them can exist without the other.

There has never been a sensation like Star Trek in the history of our planet…not even Star Wars! This series has actually altered the globe, inspiring innovators, scientists, physicians, and engineers, as well as artists, actors, and singers, as well as authors and filmmakers.

Star Trek evolved from a campy weekly sci-fi program in the 1960s where a stuntman could be dressed up in a hot, green rubber suit and convince viewers that the hero was battling a huge reptilian alien to the death on an alien planet. It was ridiculous enough to include space hippies and hundreds of fuzzy balls thrown at the main character. It even used half-black, half-white aliens to make us viewers take a close look at ourselves.

The program might have vanished into obscurity, another quirk of 1960s television oddities. Instead, it developed and extended into a film franchise, three more TV shows that each lasted seven seasons, and a fourth that lasted four seasons. Licensed goods, novels, comic books, reference guides, toys, action figures, models, board games, video games, internet games… all produced billions of dollars. I could easily write another 50 lines in this paragraph (but I won’t!).

Take a peek at what’s going on right now. As I write this, FIVE separate Star Trek TV shows are in the works!!! (Six if you include Short Treks, but let’s stick to five for the time being.) Remember when TNG and DS9, or DS9 and Voyager, were both on the air at the same time? The previous record was TWO series running at the same time. Is it true that there are now FIVE of them? You’ve got to be joking, right?

With Lower Decks now airing, Prodigy beginning in late October, Picard in February, Strange New Worlds premiering in March, and Discovery‘s fourth season following in April, we can expect a new Star Trek episode from those five separate shows to air about once a week for the next year! So much for my plans to quit my Paramount+ membership anytime soon…

Despite this, some fans would rather that there be no series at all????? I call it blasphemy!!!

The evening’s fresh new trailers concluded with the forthcoming second season of Star Trek: Picard and the “announcement” that the series had been renewed for a third season as if my enthusiasm level couldn’t get much higher. I placed the term “announcement” in quotes since fans have known for almost a year that Picard seasons two and three are filming at the same time, thus there will undoubtedly be a third season. But first, let’s have a look at the trailer…

“Time travel…again?” I’m sure some fans will grumble. I’m not one of them.

Kirk and his crew returned to “our” present (the 1960s) twice in TOS and once in Star Trek IV, but Picard never did. He visited Mark Twain in the nineteenth century and Zefram Cochrane in the year 2063. Picard was the ONLY captain who did not have the opportunity to time to “our” present (or something close). For the Bell Riots, Sisko and his crew traveled to 2024, three years from today (it’s strange how the episode originally aired a quarter-century ago when 2024 felt so far away!). The crews of Janeway and Archer also went back to “our” present—the early 2000s. Picard, on the other hand, was never given the opportunity. He now has it. Fun!

Speaking of paradise, the evening concluded with an amazing version of Blue Skies performed by the gorgeous ISA BRIONES (the android Soji), which gave both Wil Wheaton and myself goosebumps. If you just watch one item from the live broadcast, make it the last one. (However, you should actually watch it entire… I’ll be watching it again to catch up on what I missed.) Although the Livestream has yet to be released by Paramount+, one of the audience members at the Skirball Center event captured this footage of Isa’s performance…

I haven’t been this enthusiastic about Star Trek in a long time. So, if you want to stand on your soapbox and say that Star Trek should not exist, go ahead. You are not obligated to attend the party if you do not want to. Maybe there’s an alternative reality where there’s no Star Trek in 2023 and beyond that, you can beam to. Perhaps you’ll feel more at ease there.

I’m more at ease here, and I’m staying for the party! 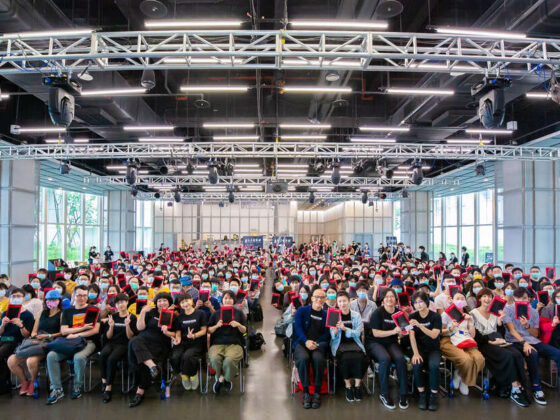